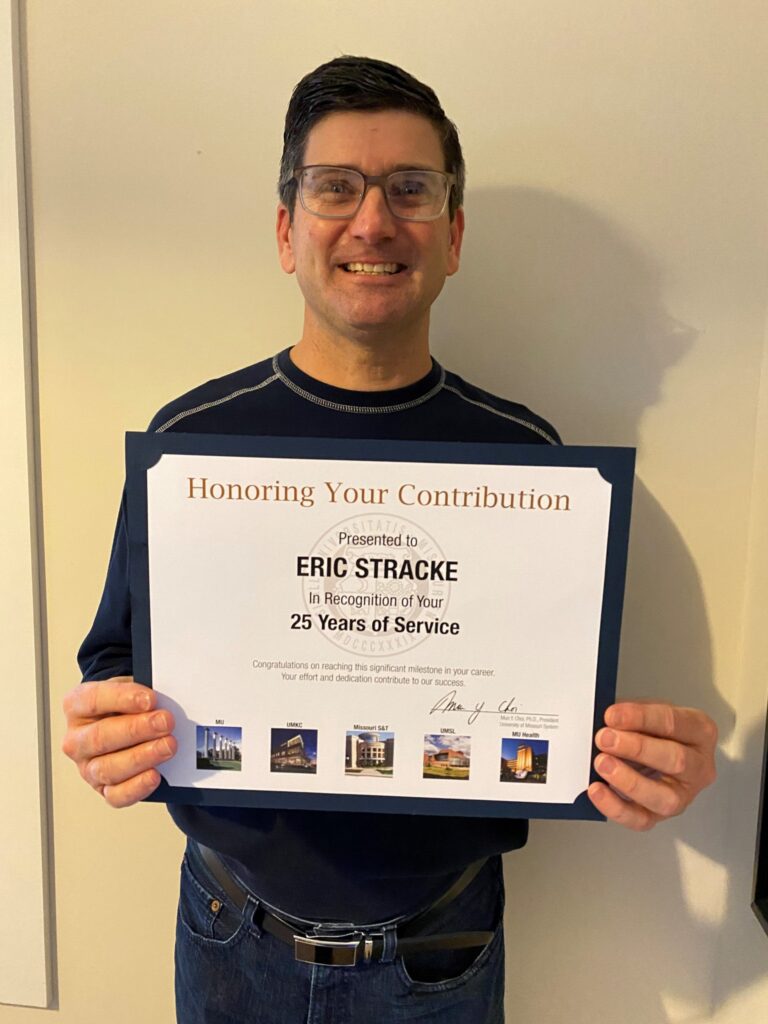 Eric considers himself lucky to have had a job he loves for such a long time.

Finding a job can be a daunting task under normal circumstances, but when you add on furloughs, hiring freezes and a global pandemic, it can become nearly impossible.

Even with 29 years of experience.

Even with glowing letters of recommendation.

Even with an unrelenting spirit and a desire to get back to work.

That is where Eric Stracke found himself in early 2020. After 29 years of dedicated service with University of Missouri, thanks to the pandemic, Eric was suddenly forced to start looking for job.

Eric worked at the University’s Student Health Center as an Office Support Assistant, a job he loved, where he was well loved by colleagues and supervisors. But, when the campus moved into virtual learning and many students were sent home for the foreseeable future, he was furloughed.

Eric considers himself fortunate that the University gave him transition assistance during his furlough and provided him the opportunity to retrain and find a different position within their system. But, he had to find a new position by December 2020 or risk losing his hard-earned benefits.

Armed with close to 30 years of great experience, glowing letters of recommendations and a newly revamped resume, Eric set out on his own to find a new job.

He tried to go to everywhere he could think of to drop off his resume,” his mother, Sharon Busch, said.  “But everyone’s doors were closed. Most businesses were not open to the public and we were struggling. We felt like we were lost out there in the wilderness”

That’s when Eric contacted Vocational Rehabilitation and was referred to Job Point and started working with advisor Bryon White in August 2020.

Fun Fact: Eric had found his job originally with the help of Job Point back in 1992. At that time Job Point was known as Advent Enterprises. Eric was also Job Point’s Award of Excellence recipient for 1992.

“When he first came in, he said his number one goal was to find a job,” Bryon said. “He was generally happy with his life, just wanted to get back to work.”

He originally hoped to find a position similar to what he had before, but as time went on and the deadline to find a new job drew closer, the team began to explore other opportunities. Through Job Point’s Discovery and Exploration process, Eric was exposed to different kinds of work and participated in some job trials and in-classroom training.

Eric found that he enjoyed doing some of the other jobs and eagerly worked with Bryon to expand their job search, practice mock interviews and submit applications.

“I think we submitted about 38 applications,” Bryon said.

“Our priority was to find a job with the University so Eric could retain his benefits and be close enough that he could continue to walk or ride his bike to work,” Bryon added.

Eric was invited to interview at several businesses, but nothing seemed to work out. One department decided not to fill the position, another informed him that he had not been chosen, another was just too far away to be feasible with his transportation barriers. It was one dashed hope after another.

And then finally, the team made a breakthrough.

Eric was invited to interview on November 4, 2020, with just a few weeks left until his deadline to find a new position.

Bryon had made a few phone calls to follow up with recruiters and by some kind of miracle, one of those recruiters also happened to have worked with Eric’s former supervisor! She had already reached out and after hearing his glowing review and hearing about his track record of being an exemplary employee, she made him a conditional offer during his interview.

And on November 23, 2020, he was officially hired as a Dining and Nutrition Associate making around $5 more an hour than he had been in his other position.

He won himself that job,” Bryon said. “I just helped him find it.”

Eric excelled in his new position and was soon given additional responsibilities. Today, he is thriving.

“I really like my new co-workers and I love getting to see people,” Eric said. “I’m constantly busy and I get to do interesting things.”

Eric celebrated 25 years of full-time service with the University of Missouri in January 2021.

We just feel so fortunate,” Sharon said. “We know that there are so many people out there still looking for work. Thanks be to God and to Job Point.”